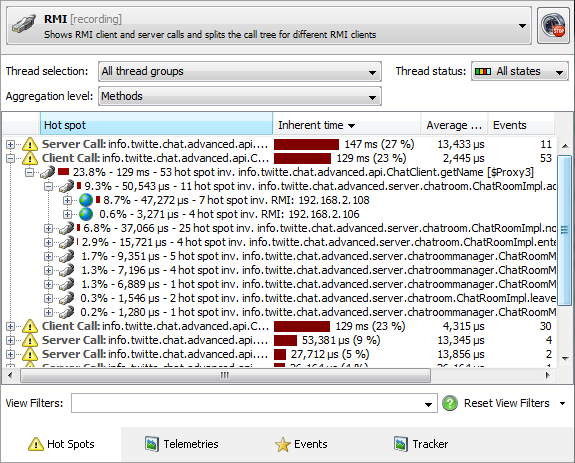 The telemetry view shows the number of client and server calls, as well as their average durations. 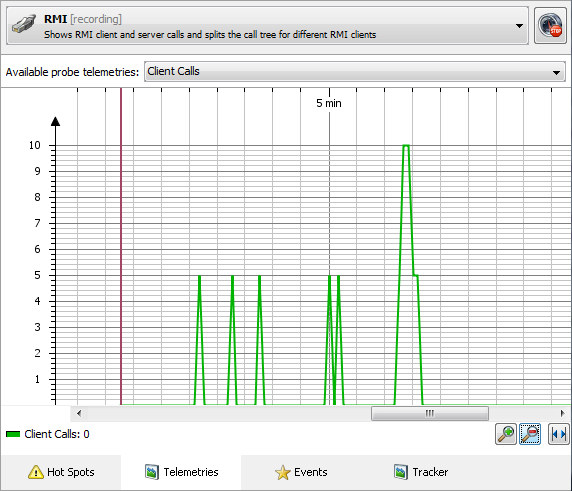 If enabled, single calls are resolved in the events view of the probe: 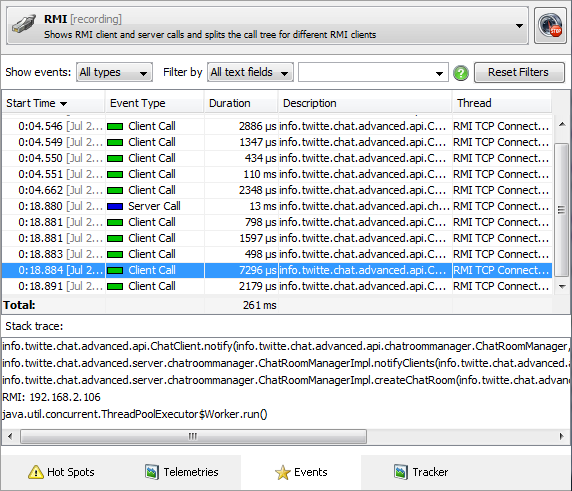 In addition to the common configuration options for all probes, you can choose if only server or client calls should be recorded and how the call tree should be split for server calls. 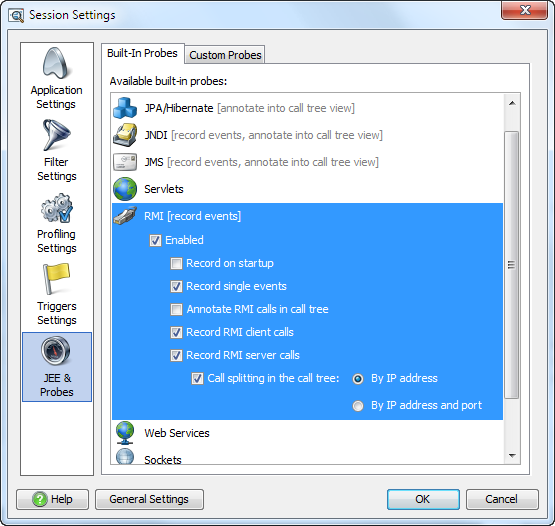 A web services probe. The probe shows client calls for JAX-WS-RI, Axis 2 and Apache CXF. Since server calls are already handled by the servlet probe, they are not shown by the web services probe. As with RMI client calls, web service calls in the JVM are made to proxy classes that do not give you any information about the actual web service. JProfiler replaces the proxy class names with the interface names and gives the call a special icon as shown below. 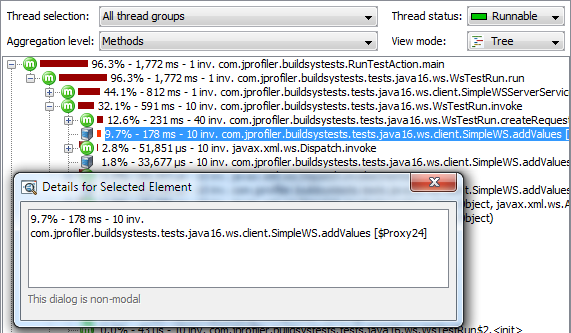 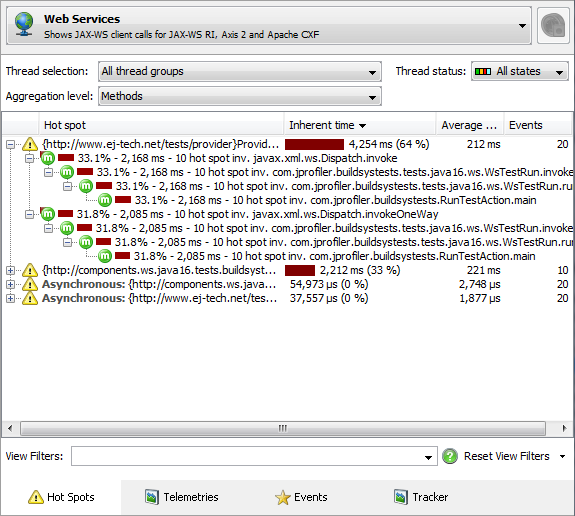 Starting with this release, jpenable will ask you whether you want to enable GUI or offline mode. In offline mode, you have to specify a config file with the profiling settings. 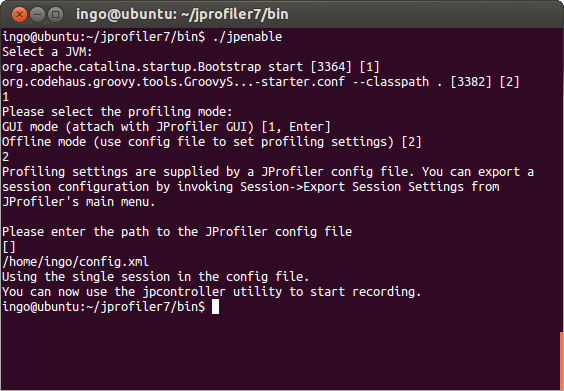 Then, you can use the command line utility jpcontroller to record and save profiling data. 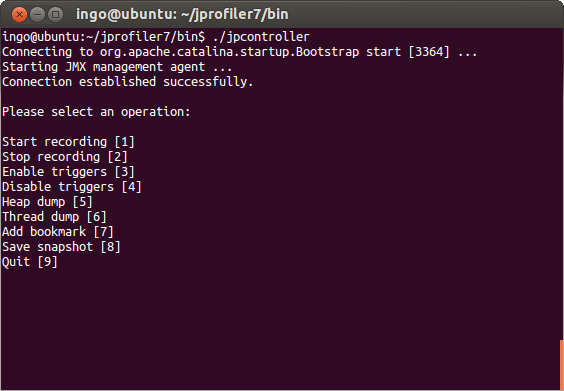 In addition, command line options have been added, so that jpenable can be run without user input. If the config file with the profiling settings contains appropriate triggers, you can use it to automate on-demand profiling without any user interaction. 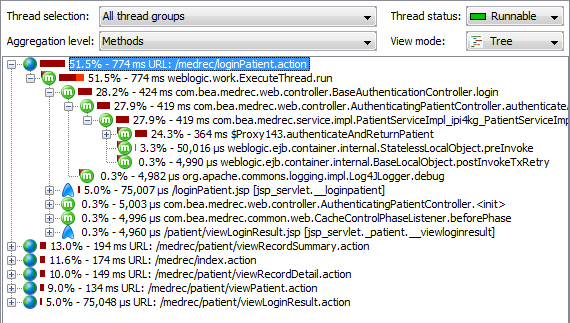 Improvements in the reference views of the heap walker. Previously, incoming references from the stack were only shown as "java stack". This release adds thread and method information which help you solve stack-related memory leaks much more quickly. 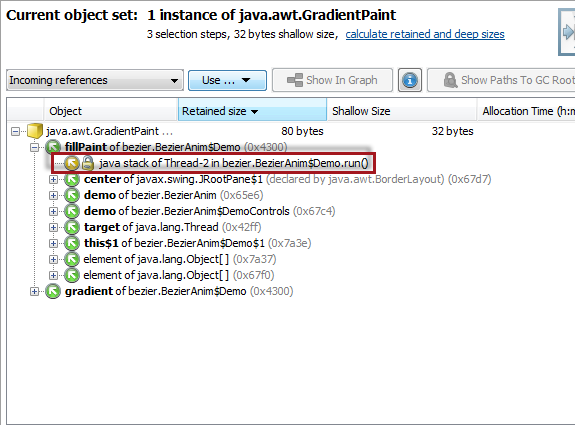 Up to now, linked lists could be a big problem when searching for memory leaks. The chain of incoming references through a linked list scaled with the size of the linked list and could make working the with reference trees or graphs next to impossible. JProfiler 7.2 introduces compact paths for some well-known collections with an internal reference structure. For linked lists, the "collection content" reference shown in the screen shot points directly from the linked list to the list item. If you search for paths to garbage collector roots, the found paths can now be interpreted much more clearly. 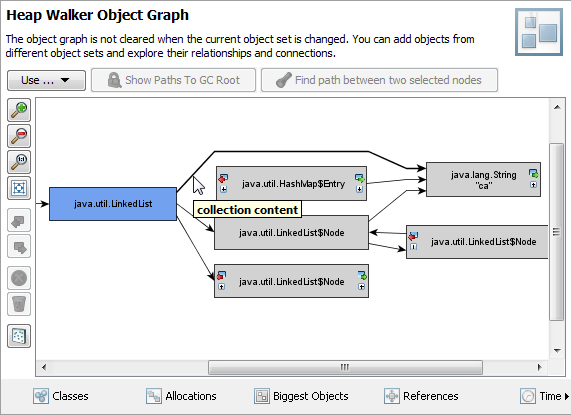 Compact paths are also shown for hash maps and tree maps. This is especially important in the cumulated incoming reference view, because the internal reference structure of those collections could fragment collection content into many blocks, thereby preventing a comprehensive analysis of the incoming references. Also, hash maps are very common in reference chains and the "map key" and "map value" nodes are much more descriptive than the internal structure. 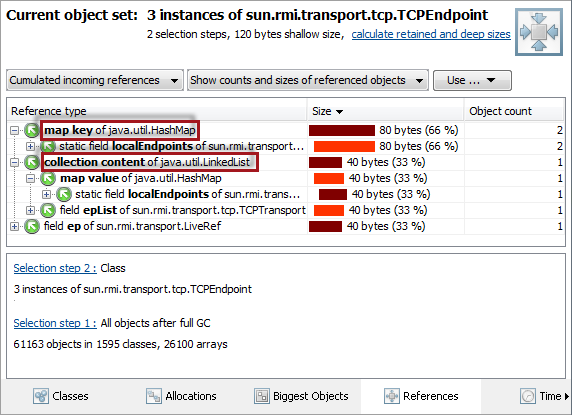 Finally, the cumulated incoming reference view now shows object counts, sizes and percentages that refer to the top level entry. Previously, each level was treated like a new independent object set. This change makes it much easier to analyze what percentage of the current object set is held through a particular chain of references. 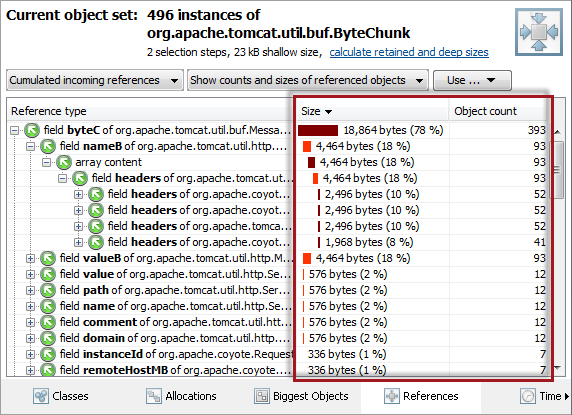 New inspections for class loaders and class inheritance have been added to the heap walker. 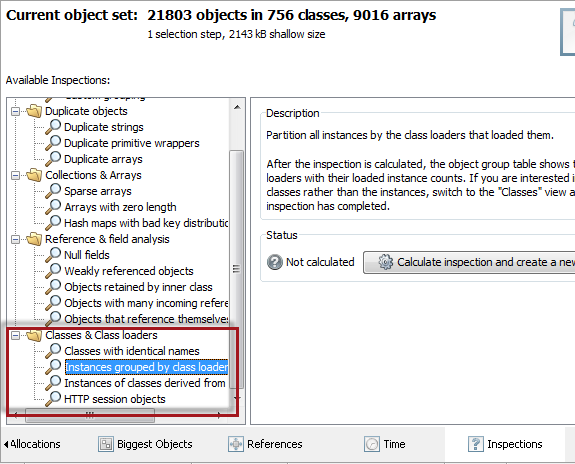 The "Instances grouped by class loader" inspection groups the current object set by the class loaders of each instance's class. This is of great help when analyzing class-loader related problems. For example, by executing this inspection on the entire heap, you can quickly get an overview of what class loaders are active and how many associated instances are on the heap. 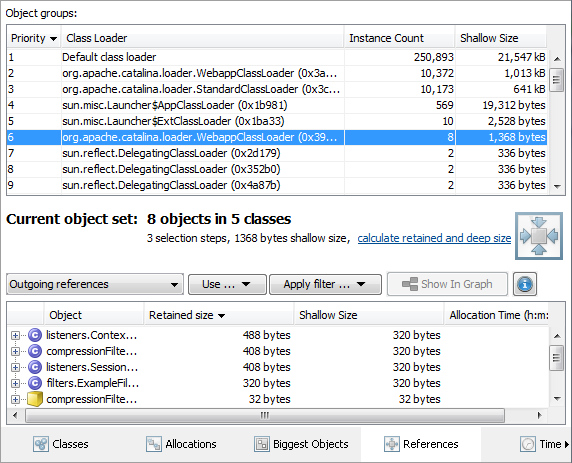 The "Instances of classes derived from specific base class" inspection lets you select a class or an interface and gives you all instances of implementing or derived classes, something which was not possible before. As a convenience, we have added the "HTTP session objects" inspection which selects all classes that implement javax.servlet.http.HttpSession. This gives you quick access to all session objects without having to know their class names. 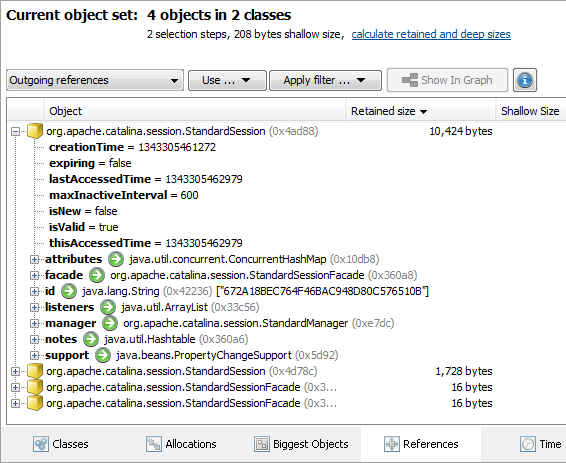 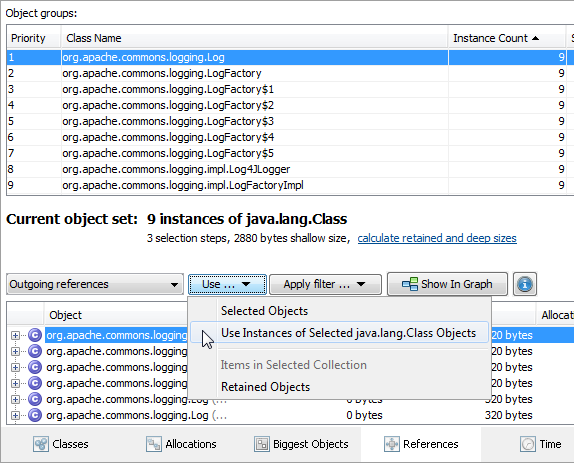 On a related note, JProfiler now groups classes with the same name and shows the class count in brackets after the class name. This applies to the classes view in the heap walker and the "All objects" and "Recorded objects" view in the dynamic memory views. 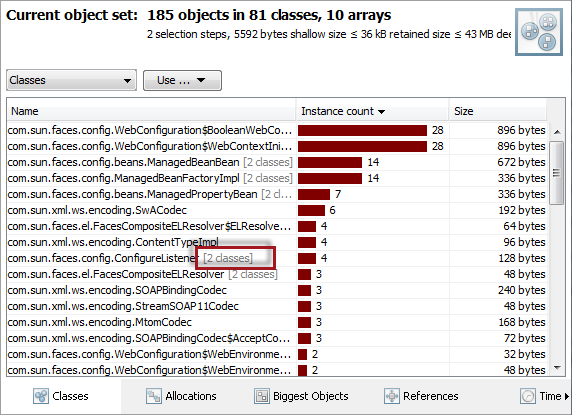