The documentation has been rewritten from the ground up. Instead of the old reference-style documentation that focused on explaining all the UI elements, the new documentation is in the form of a book that can be read sequentially. Plenty of screen shots illustrate the context of each chapter.

In addition to the HTML and PDF formats that are included in the JProfiler distribution, the documentation is now also available as an eBook in epub and Kindle formats. The eBook files can be downloaded from the web site. 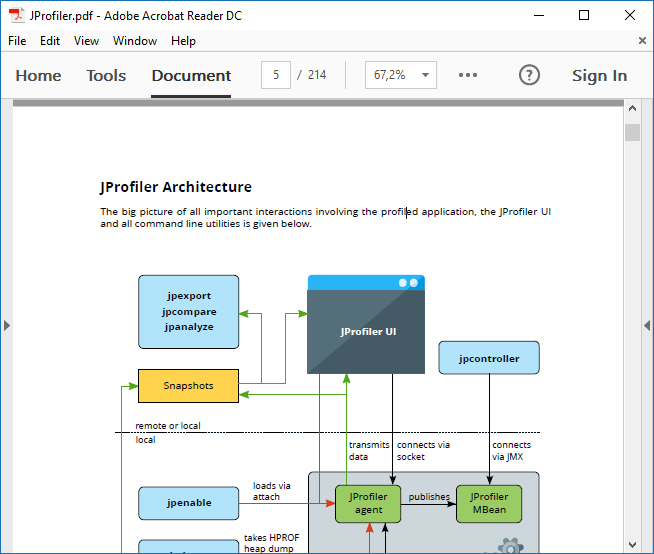 With the F1 key, you can show the most relevant chapters of the book directly from the UI. Many UI elements now have adjacent help icons that show tool tips with detailed explanations. 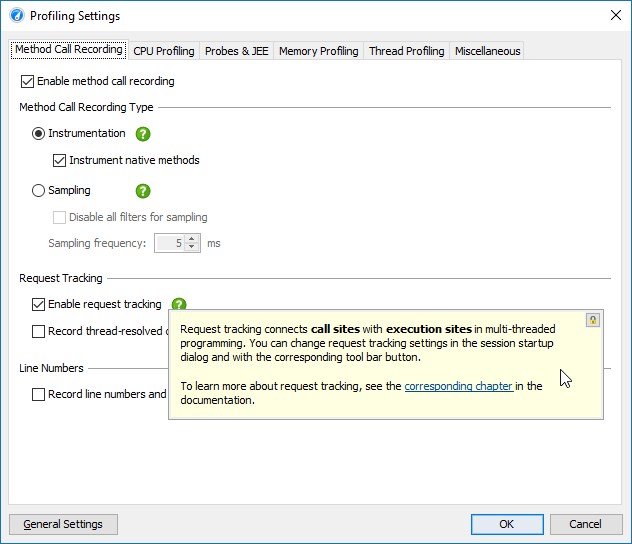 Custom probes have been redesigned from scratch. There are now two separate probe APIs for two fundamentally different use cases.

The injected probe API replaces the old custom probe API. You can use it to write probes for 3rd party components. Injected probes are configured with annotations, each interception is defined by an annotated method in the probe class. Both payload interceptions like SQL strings of the JDBC probe or call tree splitting interceptions like URLs of the servlet probe are supported.

An injected probe can be as simple as

Embedded probes are intended to add probes to your own code. The probe is set up by deriving a configuration class that also serves as a probe ID. Instead of having to define intercepted methods, you then call the embedded probe API directly:

An embedded probe is part of your software and automatically appears in JProfiler without any additional configuration if a JVM is profiled and the probe class is loaded. Calling the embedded probe API adds next to no overhead in production because its method bodies are empty and are only wired up to actual code if the profiling agent is present.

The new documentation has chapters for both injected and embedded probe APIs and the Javadoc contains detailed information for all features. The probe API artifacts are available as Maven dependencies and are licensed under the Apache 2.0 license.

With script probes, you can define payload probes directly in the JProfiler UI. They replace the old custom probes and are are a lot easier to configure. For each method interception, you can configure a script that returns the intercepted payload as a string. 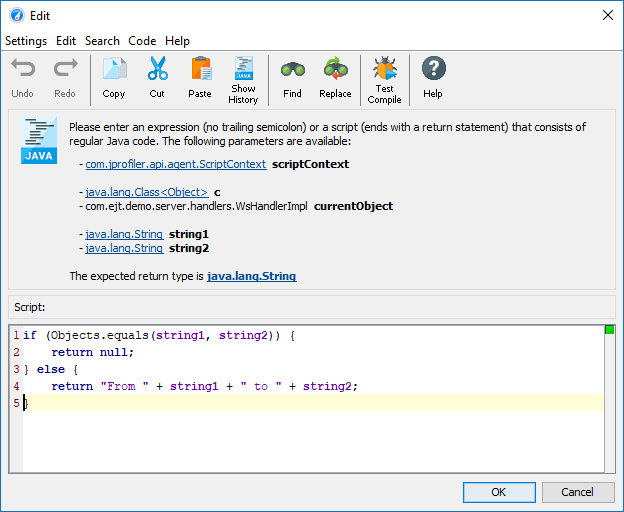 The context menu of the call tree contains an action that makes it easy to select the intercepted method for a script probe. 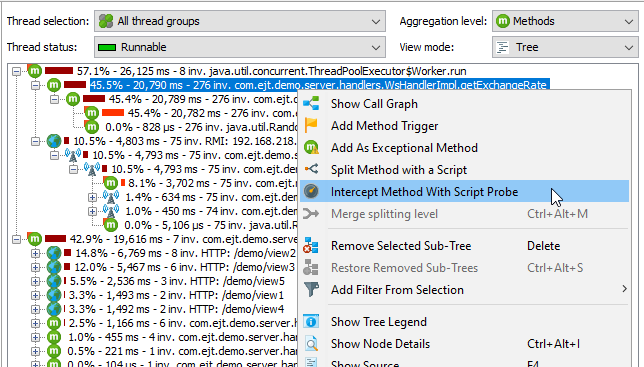 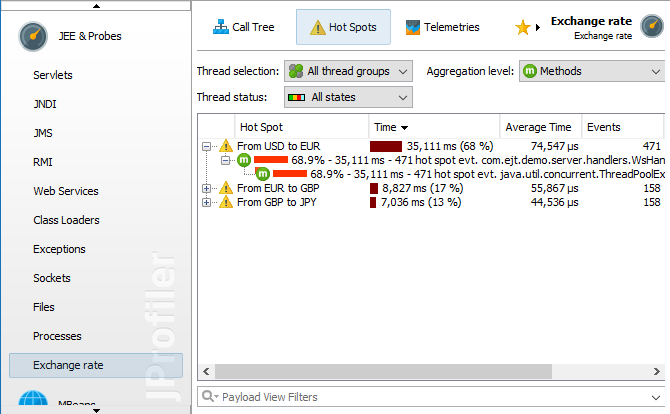 With the profiling task and a pre-configured session that includes triggers, you can automate profiling session in your build process:

There are also tasks for command line export and command line comparisons, as well as pre-analyzing snapshots with heap dumps.

The merged reference views in the heap walker have been re-implemented and are now much more usable and helpful. The views now show reference holders and referenced objects on each node and make the referencing relationship much clearer. 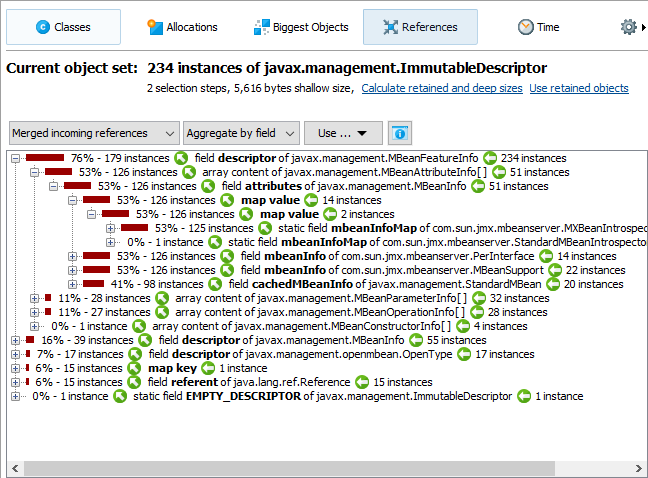 In addition, the references can be grouped by class instead of by field. This is the new default mode for the merged reference views. Many non-standard collection types that are not directly supported by the compact reference types in JProfiler are collapsed automatically in this way. 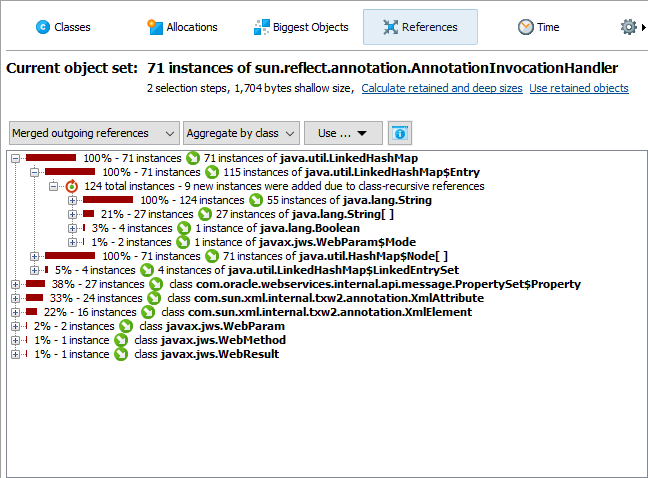 At each node in the merged incoming references view, you can select the objects in the current object set that are referenced in this way or the reference holders for the particular node. 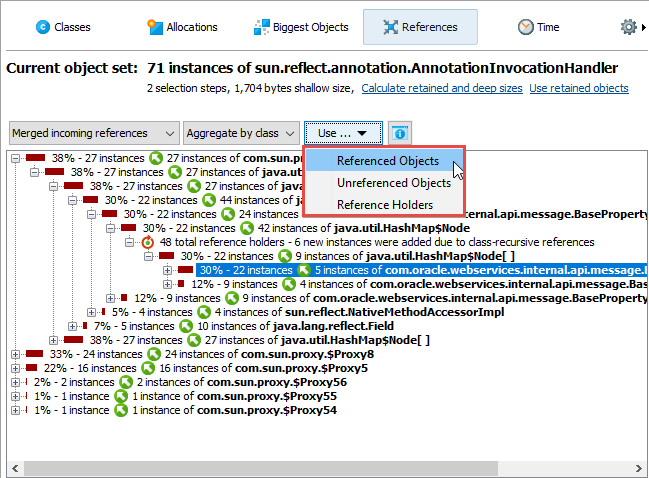 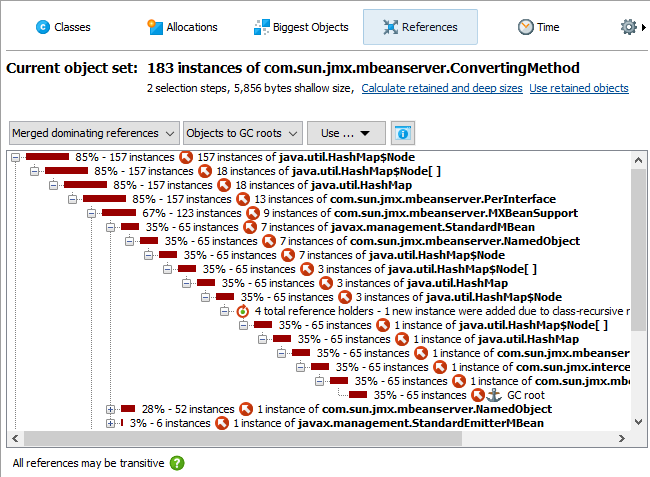 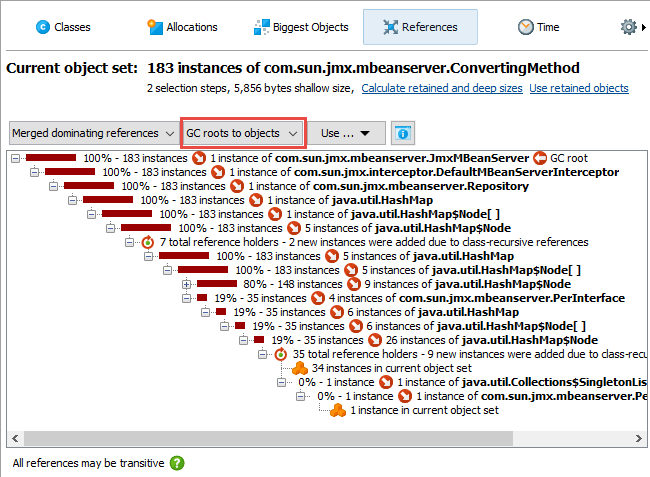 In the heap walker, class and class loader grouping in the biggest object view have been added. If you have many biggest objects of the same class, it is useful to switch to class grouping to get a better picture. 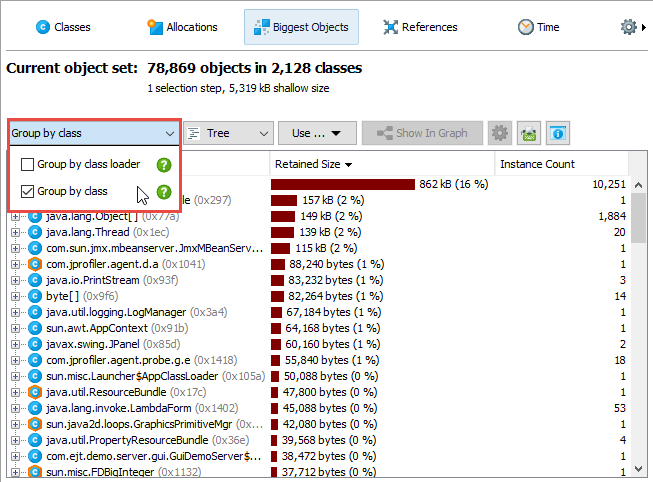 If class loaders are an important aspect of your investigation, the class loader grouping will help you find out where the classes of the biggest objects are coming from. 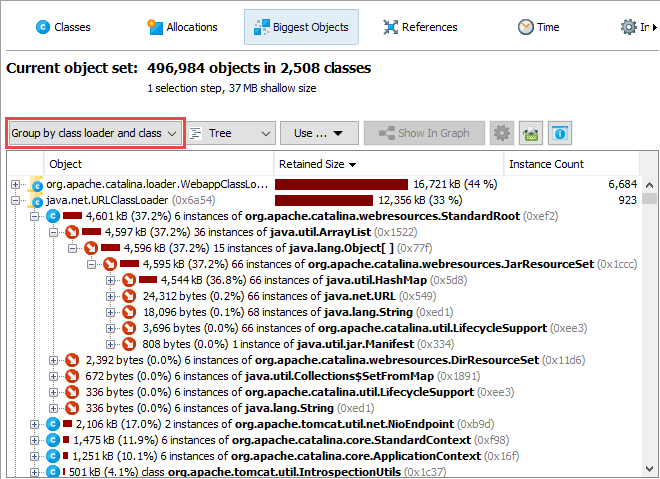 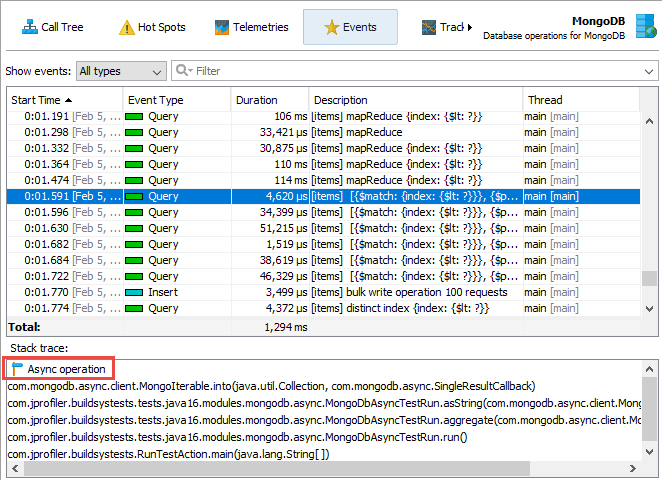 A probe telemetry overview has been added that combines all telemetries of the probe. Just like for the overview of the standard VM telemetries, you can click on the telemetry name to show the full view. 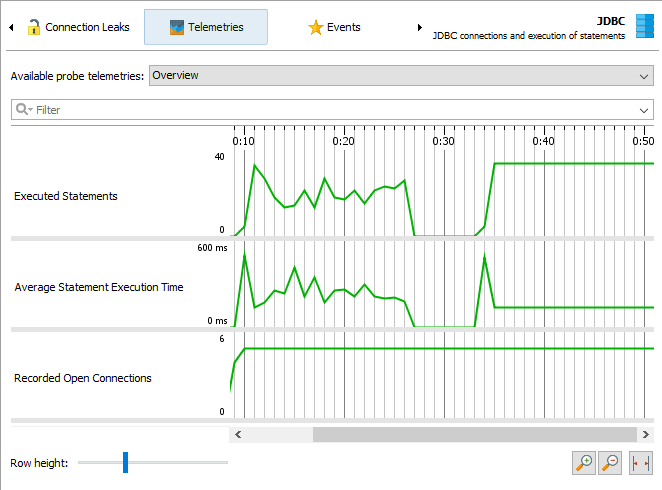 Quick search in the node detail dialog has been implemented. The node detail dialog is an important tool for probes where the payload strings can be very long, for example the SQL statements in the JDBC view. When moving the mouse over the text area, actions for quick search and copying all text to the clipboard become visible. 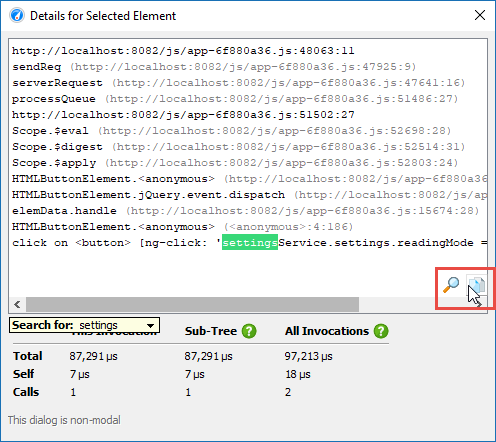 While profiling Java 9 was already supported by JProfiler 9, the JProfiler UI and all command line tools can now run on Java 9. This is especially relevant for Linux desktops where the JProfiler UI can now make use of the new HiDPI support in Java 9.

JProfiler makes a lot of use of scripts that are entered directly in JProfiler. Now you can select a Java 9+ JRE to compile these scripts.

Also, starting with this release, Java 10 can be profiled with all features supported by JProfiler.