In the default uninstaller template, a "Load response file" action has been added to the startup sequence so that you have access to all response file variables from the installer.

Note that these changes only apply to the default template for new projects. For existing projects, you have to add the "Load response file" actions yourself.

Improved proxy handling and server side authentication. Both installers with downloadable installation components and updaters need to download files from the internet which often behind a proxy server. Previously install4j queried the user when it could not create a direct connection to internet. Now, the proxy settings of the default browser are used automatically on Windows and the proxy configuration dialog is use as a fallback if these settings fail. A possible proxy authentication still has to be provided if necessary.
In addition to proxy authentication, install4j now also supports server side authentication. If the downloaded file is in a password protected directory, the installer will ask the user for credentials.

Console access for Windows GUI launchers. GUI launchers on Windows do not have access to the console from which they were launched. All output to stderr and stdout is lost unless it is redirected internally. This release adds an optional -console parameter to all generated launchers that will try to find the invoking console and attach stderr, stdout and stdin to it. This is useful for debugging purposes or for simulating a console mode with a GUI executable.
In order to activate the -console command line parameter, you first have to enable it in the launcher wizard: 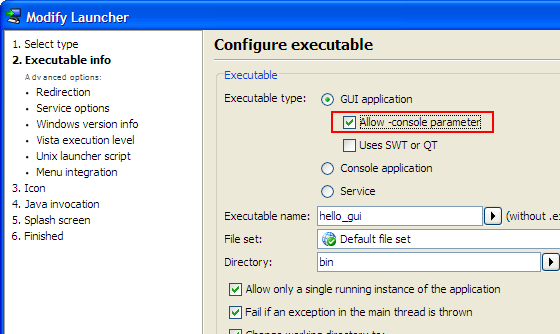